Jessica Maurer: Hopefully your infected wounds aren’t from this

Not really sure. I woke up while in the hospital with them. I thought it was a rash when I woke up.  My best guess is that I scratched through my blue shirt. That picture is the very first morning that I found the wounds. 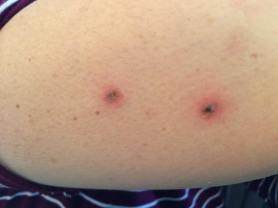 February 26th Before and after peroxide 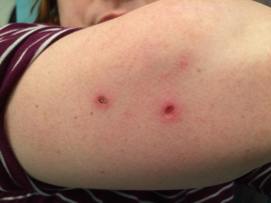 Yah wanna know know something even weirder? I just cleaned it with hydrogen peroxide and pulled the scab because it has concerned me all along. Under the scab is light blue. And the mystery continues. Still nothing swollen and it doesn’t hurt and no fever. Just weird. I am going to have my husband take a look tonight. As for puncture vs scratch. There just is no possible explanation besides conspiracy that could explain what could have happened.  Man now I’m getting worried again . It is so deep. I only cleaned out the one but you can see how deep it is and the blue color is still there. Maybe I will call the hospital floor where I stayed and see what they say.  But really I do think it is ok just weird.

(In the end, both wounds finally healed, but a year later I still have significant scars from these mysterious wounds.  So very weird)

Apparently my light sensitivity was much greater than I realized. I just hung blankets over the windows in my bedroom and wow (little did I know they would remain on the windows for almost a year until I replaced them with room darkening shades), what a difference. Looks like I will be hunkering down in here for the foreseeable future because we do not have a blanket big enough to cover the bay window in our living room. But wow, do my eyes feel so much better. Good thing my bed is comfy.

Just an update on the very weird blue fanged cat vampire bat fang bites only acquired at the hospital. Healing up just fine. Still look weird but the itch so I know they are healing. Thanks to those of you who gave advice. I don’t think we’ll ever really know what happened.  It’s the size of a pencil eraser maybe a little bigger. I just did a little looking on CDC and there is no swelling or tenderness. The black looks weird but is really due to the dye in my shirt likely. And when it scabbed it turned black. I will definitely keep an eye on it and I will be back to the dr in a week. I meant to show him on Mon but forgot. To much to talk about with the head.

Mystery of the day. I woke up with these mysterious puncture wounds on the back of my arm with blue ink that won’t come off with an alcohol swab. And they hurt. I have not noticed them before and I have been in the hospital for the past 6 days now. No idea. The nurse says it looks like I got tazed (no idea how to spell) or like fang markings??? What the hell!!!!!! She said the wounds look 15-18 hours old like maybe I wad scratching myself. I am wearing a blue shirt but it is the wrong color. I really feel like I need the help of Mulder and Skully or shaggy and Scooby or something. Anyone have any ideas? Oh and the head is feeling a bit better today and I am hoping to go home today that is unless they discover I was taken for
alien experiments in the middle of the night.

Kelly Sheets Long Too weird.
Edward J Bradford Vampires with blue teeth.
Marybeth French You are a mystery..I am baffled??!!
Apryl Mizener Yoder They look like a staff infection….
Joy DeSimpelaere That’s really odd, has the doctor checked them out?
Edward J Bradford It looks like these are attempts at an IV…but that’s really odd placement
Heather Loose Johnson I’m telling you I was abducted
Jamey Burger   Lost time?
Heather Loose Johnson I’ve been in the hospital for 6 days who knows
Rachel Crowley If you had cuts on there before and they left the blood pressure cuff on for whatever reason, most of them are blue. If they were new cuffs, the color could bleed through. Not in IV start, hole too big and he is right, not a spot they go. Not really angry enough for a staph infection, but maybe, doesn’t explain the blue though. Good luck smile emoticon
Stephanie Jordan What in the world…
Christy Young Kelly are you sleeping on a needle?! what the hell??!
Heather Loose Johnson Another pic. Blue is likely from my shirt and I likely scratched it in my sleep. But mystery is more fun

Christy Young Kelly Are the medications making you itchy?
Heather Loose Johnson I got the IV out and the tape off. I think it irritated my skin a bit.
Michelle Hanson Litke Wow they are perfectly round too
Sandi Davidson glad to hear there is a little improvement. Hope it continues.
Susan Krawczak Johnson There was a full moon last night….
Julie C. Wiles How weird!
Terra Sadek way too creepy Heather..
Michelle Hanson Litke Maybe a nurse was secretly stabbing u
Julie C. Wiles How far apart are the pokes?
Julie C. Wiles Vampire bat?
Heather Loose Johnson Now that’s more like it
Katie Marl You are still there?
Heather Loose Johnson Home now smile emoticon
Katie Marl Oh good!
Stephanie McLaughlin I would go with the characters on “Bones” They are pretty smart too
Debbie Smith-Wright Wow Heather I think you were taken by Aliens! Hopefully they did something to you to help your head aches. Glad to hear you are coming home soon. I bet your sick of being there by now. And I’m sure the family misses you too.
Cassie Harder Rittenhouse Weird!
Merry Dunne Blades I second that – Very Weird !
Heather Loose Johnson Yep weird.
Whitney Skeaze wth??
Heather Loose Johnson Update on the craziness. Going to put antibiotic cream per moms instructions today. What next. Really!!! What next??

Heather Loose Johnson Any nurses in the area want to make a house call. I am not going back to the hospital!!
Staci Gordon Jackson Yikes!
Shanon Smith I think you need an urgent care visit as that doesn’t look any better that’s for sure
Heather Loose Johnson Not going anywhere:). Ha! If puss starts coming out I will go in.
Sandy Cushman Howell I think when you were sleeping they let med students practice their shot giving skills.
Heather Loose Johnson With a ginormous needle. It looks like the puncture wound from a cat bite. Maybe a blue cat? But now the blue is turning black. Oh well I am all bandaged up
Joy Gooch Ketchum Shock therapy maybe!
Whitney Skeaze Definitely aliens.